We’ve all been there. Watching sports channels, thoroughly confused about what is going. Yes, straightforward soccer, basketball, and tennis are always there but frankly, some of the Olympic Games, for instance, can be real head-scratchers. They don’t always get as much limelight as regular sports do and so, many of us rarely end up knowing too much about them.

Slalom skiing is one such sport. On the surface, it looks just like regular skiing but with a bunch of poles, colorful flags and signs spread all across the ski slopes. What do they signify? Why is it an Olympic sport? What is slalom skiing even?

If you’ve ever found yourself wondering what slalom skiing is, this guide is for you. Allow us to delve into this exhilarating winter sport and the many rules and regulations that set it apart from regular skiing.

What is Slalom Skiing?

In essence, this is but a relatively more complicated variant of alpine skiing. Herein, skiers compete on a course that has been dotted with several blue and red poles which, in this game, are called gates. The concept was devised by British sportsman Arnold Lunn in the early 1920s.

As per the rules of slalom skiing, each gate must be at least 30 inches wide and set no less than 13 feet apart from one another. In the initial days, the gates were merely small flags stuck in the snow. Eventually, they were replaced by longer bamboo canes that could bend and snap back and hit the skiers. To solve this problem, new plastic gates were devised with springs to regulate motion, thereby causing them to tilt when they pass through.

Generally speaking, an Olympic match or any other world championship event requires about 55 to 75 gates for male skiers. Slalom skiing for women includes 40 to 60 gates. The men’s competitions must take place on a course that includes a vertical descent of 590 to 722 feet, while women’s course must cover a descent of 426 to 590 feet.

Exactly what do they have to do, though? Well, the objective of slalom skiing is to ride through the various gates with the top of one’s skis passing through them. Missing so much as a single gate leads to immediate disqualification. Of course, as is the case with any race, the skier to complete the course the fastest, without missing any gate, will be declared the winner.

What Do the Red and Blue Flags Signify?

In slalom skiing, the first set of gates is always red, followed by blue. The colors keep alternating throughout the course to allow skiers or snowboarders to determine which side of the gates they must go through – left or right.

Slalom skiing rules state that participants must start at the top of the slope and then begin making their way down to the first set of red gates. As they do so, they must meander between the gates with both skis and legs together. The same practice is repeated once they arrive at the blue gates, all the way down until they finally cross the finishing line.

Like we said earlier, skiers must make sure not to miss any of the gates, lest they be disqualified. Sounds hard, doesn’t it? It is! Slalom skiing is a game of very fine margins. One single wrong move and you could end up on the wrong side of the gate. Avoiding this gets even harder when it comes to professional slalom skiing – competitors can allow themselves a little extra room to ensure they cross the gates easily but that will slow them down. Perhaps that is why, you may have noticed, slalom skiers get so close to the edge of the gates… they are simply trying to win!

Why are there two gates on each side though? Since every skier is getting near or touching the inside flags, why have a second flag there in the first place? These are questions many of us have had whilst watching slalom skiing competitions. Unfortunately, there is no right or wrong answer. There is no answer. This is merely how the slalom skiing rules have been written. Feel free to ignore the outside gates and focus on the inside poles as that is where all the adrenaline-pumping action will bet taking place!

If you’re looking to practice slalom skiing and are lucky enough to have access to a deserted slope, invest in these Slalom Ski Poles by Zipline Ski – the official supplier of the United States’ national ski team. These are super sturdy and come with a Dual Density Grip to ensure you get to test yourself to the limit. 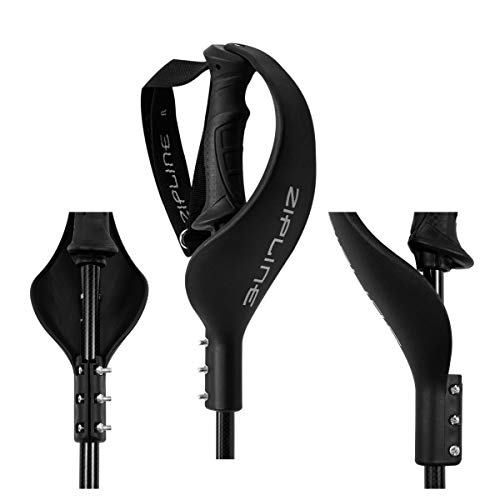 Are There Different Forms of Slalom Skiing?

Generally speaking, there are two main kinds of slalom skiing: slalom and giant slalom. Although they have much in common, such as the requirement for players to navigate through the gates, giant slalom usually has a lesser number of gates. And what’s more, they are placed further apart from one another. The ski event first saw its first world championship in 1950 and was included in the Olympics in 1952.

Yup, you guessed it. This makes giant slalom much easier in comparison to regular slalom skiing as it does not require fast, sharp turns and extra skill and effort from the skiers. As a result, it is also much more suitable for newcomers.

Believe it or not, slalom skiing came up nearly 100 years ago – in 1922 to be precise. As with everything else, the equipment used in both slalom and giant slalom skiing has evolved a great deal since then. If it hadn’t, well…let’s just say we’d be a tad bit worried.

A good example of this change would be the length of the skis used. Throughout the 1980s and 1990s, the minimum cut-off was 203 cm, with a maximum length of 209 cm. But by the 2002 Winter Olympics, most competitors opted for shorter skis of about 160 cm or less to make it easier to meander around the gates.

Taking cue, the Fédération Internationale de Ski (FSI) – in an attempt to regulate competitors’ growing demands – decided to set a minimum ski length for all international slalom tournaments. It was set at 155 cm for men and 150 cm for women. A few years later, the required lengths were changed again to 165 cm and 155 cm for men and women, respectively.

As ski courses become increasingly difficult to ride over, professional skiers – especially professional slalom skiers – are often recommended shorter skis to ensure optimal maneuverability at high speeds, lest they crash into the gates. In some professional competitions, you can use skis as short as 20 cm!

Irrespective of your preferred form of skiing, you will need the necessary equipment for a favorable experience. We recommend drafting the list of all the items, starting from your head (helmets, UV goggles, warming face masks, etc) right down to your feet (insulated socks, snow boots, thermal underwear, etc).

Tips and Tricks for Slalom Skiing

Slalom skiing is an exciting winter sport, but be warned, it is also rather challenging. It involves great speed, technique, and confidence. If you are new to the sport, we recommend practicing under supervision. Simultaneously, you can take cue from some of the tips below, carefully derived from seasoned and professional alpine skiers.

Most skiers assume sharp turns are necessary for slalom skiing, seeing as how the event is based on fitting the turn between gates. In reality, however, such is now the case. You may have noticed how smoothly professional skiers turn and seem to glide through. This is because they purposely take round turns which make it easier to maneuver. Close-cut turns can cause skidding and waste valuable time.

When you clear the gates, make sure your arms work independently from your body; this helps maintain yourself on track. Flailing arms will only slow you down or deviate you on the way.

Keep your eyes focused. This is incredibly important if you are to stay in line. Ensure your skis pass through the gates, not around them. No one ski should end up on the incorrect part of the gate and being alert mentally assists with this. Bring your skis towards the inside of the gate for a sharper turn.

To succeed in slalom skiing, you must know how to carve. Otherwise, you will simply drift off on slopes or become slower. You could eventually even miss a gate.

Here’s a little inside tip: Start carving whenever you’re able to. For this, skiers need to get into the right posture. Pro-tip: Flex and unflex your hips and knees throughout the motion for more control.

As they say, hard work never goes to waste. One has to go the extra mile to achieve something in life. Slalom skiing is no different. The only way to improve your game is to hit the slopes as often as you can and practice till you get the desired results.

What Are the Benefits of Slalom Skiing?

Much like any other high-energy sport, slalom skiing offers many physical benefits. For once, it spurs weight loss, seeing as how skiing is a very strenuous activity and skiers burn a large of calories a day.

It has also been proven to strengthen your muscles, especially the ones involved in the arm and leg functioning. This is primarily because skiing utilizes the power of in one’s arms and legs, thereby building their endurance with each turn. Racing down a mountain also requires a lot of stamina. Altogether, continuous practice helps develop full-body strength.

But most importantly, skiing – like any other form of exercise – can elevate one’s mood by stimulating the production of ‘happy hormones’ like endorphins and adrenaline. Scientific research has proven these are very helpful in easing stress, anxiety, and depression.

The International Ski Federation (FIS) Alpine Ski World Cup is one of the premier slalom skiing tournaments in the world, held every October in Austria, since January 1967. The 2021-2022 season marks its 56th consecutive year.

Other than this, fan and slalom skiers are looking forward to the upcoming Winter Olympics in China, to be held from February 4 to February 20 at the Yanqing Ski Resort in Beijing. The winner will be given the coveted crystal globes for their respective countries in Courchevel/Méribel, where the World Championships will be held in February 2023.

Some of the professionals who have recently made it big in the slalom skiing world include:

We hope these common facts about slalom skiing helped! As we said, it can be great fun but requires adequate practice, whether you want to hit the big leagues or simply enjoy a timeout in the fresh mountain air. Either way, it is a great way to build up your strength, endurance, and mind-body coordination.

If you want to find out more about slalom skiing or skiing in general, check out National Geographic’s 100 Slopes of a Lifetime: The World’s Ultimate Ski and Snowboard Destinations Hardcover. 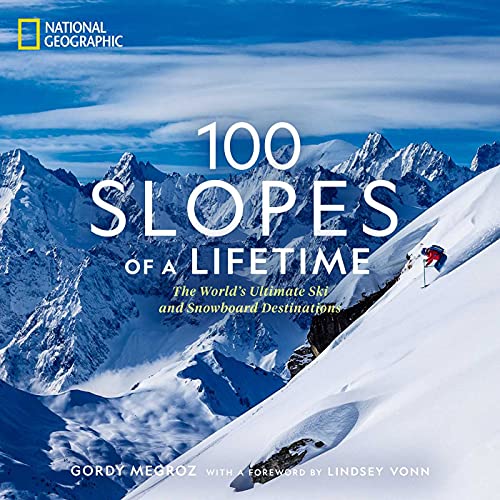