As the winter approaches, more and more snow sport enthusiasts head towards the slopes at ski resorts worldwide and look forward for an off-piste adventure. Among them, many tie up their skis or snowboard for the first time. It is usually difficult for beginners to decide which one to choose to start learning, and it requires you to consider several factors. Many beginners ask, what is easier, skiing or snowboarding? It’s hard to answer this question since both sports have their rules, styles, complexities and involve certain risks of injuries. In this regard, this article will explain everything you need to know about skiing and snowboarding to help you decide which one to start learning!

The question about which one to start with, skiing or snowboarding, is quite old, but there’s still no definite answer to this. Try asking this question to a skier, and they’ll swear by skiing. Ask a snowboarder, and you already know the answer. It is always difficult to get an objective and neutral opinion when it comes to the question of the level of difficulty of the two camps. Let’s put all cards on the table and then decide which one is easier for you according to your style and preference!

You have to consider several factors when deciding which of these two sports is easier to start with. Let’s discuss those factors to help you get an idea!

Skiing or Snowboarding: What is Easier to Learn?

An old cliché says skiing is easier to learn but difficult to master while snowboarding is harder to learn, but once you learn to stick your feet on the snowboard and start plowing through the snow, you master it quickly. This cliché answers the question to some extent. The reason is because you’ll find skiing more natural when you start to learn it. It is easier for you to maintain your balance since your legs are separated and regain it easily if you start to miss it. You are also looking forward so that you can see everything in front of you.

You will often see amateur snowboarders in the middle of the slope, their buttocks in the snow. Just standing still on your board is a challenge in itself. During this time, a beginner skier will slide gently in snowplow from their first day. When they gain confidence and try to turn their skis parallel and glide with ease, things start to get complicated for skiers.

As for the ski lifts, we can say that skiers have a big advantage there. The departures and arrivals of wobbly ski-lifts on slopes and surrounded by elastic ropes are a psychological and physical challenge for snowboarders. You have to negotiate your speed and aim right or be ready to walk a few meters!

The majority do not find the basics of skiing hard to learn, but it takes years to master the sport. A qualified instructor can help you learn to descend on the snow in the first week. However, once you know the basics, starts the difficult part, which is learning the technical side of skiing. The different turns can be difficult to master and reproduce at higher speeds and on steeper slopes.

In contrast, the hardest part of learning snowboarding is maintaining the snowboard balance and getting used to having your legs tied together. That’s why it takes longer to start snowboarding than skiing. However, there are no technical sides to this sport. Once you learn to balance your feet on the snowboard and begin to travel on the snow, you get faster every day and master all the skills quickly, unlike skiing. It will not take long to master snowboard carving and Vitelli turns!

You might have guessed it already, but for snowboarding beginners, it is easier to go off-piste. Off the slopes, snowboarding is king! Riding in powder snow is a transcendent experience, very different from sliding on the piste. Although it takes some time to get used to the powder snow, the same skill is required for off-piste and on-piste in snowboarding. As in weightlessness, the movements are slower and smoother. The delicacy and lightness of the movement are similar to those of waves. For a good reason: the very inventor of snowboarding first named it “snurf,” surfing the snow because the sensations are akin to sea surfing. This is one more point in favor of snowboarding!

However, in skiing, off-piste is like a new and different world of sport from on-piste. Beginners find it difficult to learn to turn and balance on the powder snow in off-piste skiing. 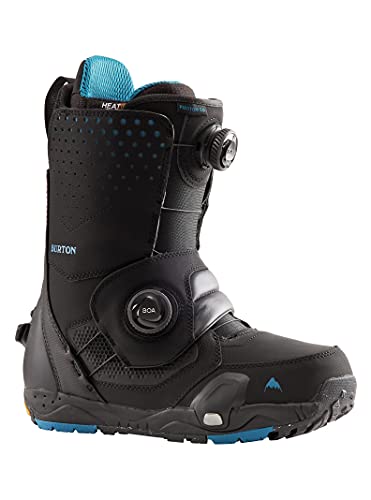 Ski boots are much stiffer and heavier, giving you a robot style when you walk with them, for example, Salomon X Access 80 Wide Ski Boots for Men, Rossignol AllTrack 110 ski boots, Dalbello DS 110 Ski Boots, etc. All ski boots are heavy and long intended to support the ankle that makes them less comfortable than snowboarding boots. In addition, there are poles and skis, which must be managed to hold with one hand without letting them slip. So, the snowboarders win this round. 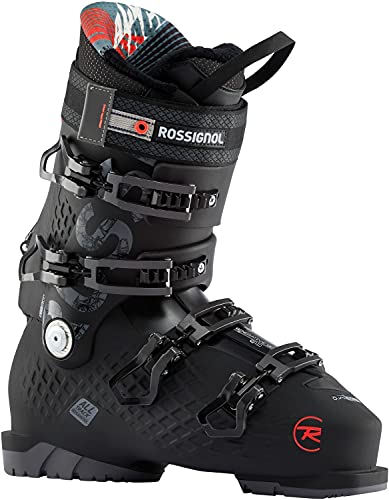 If speed is what appeals to you, choose skiing. It is true that before you can safely carve beautiful curves, you will need a few years of practice. Skiing is a sliding sport that, at an equal level, is faster than snowboarding. If we put a snowboarder and a skier (of equal skill) in the same boardercross race, the skier would win. It’s not about the skill or difficulty level. It is just because of the unbiased fact that skiing is a faster sport. So to the ski or snowboard question, the answer for speed junkies is ‘ski.’

The big plus of skiing is also in the variety of shapes it takes. From cross-country skiing to telemark, including alpine skiing, ski touring or skating; skiing can be hidden in different forms. For touring snowboarders looking for fresh snow, the split-board replaces snowshoes, and with two clicks of the ratchets, you’re with a board on your feet, ready to go up the slope.

Ski or Snowboard, Which One is More Dangerous?

All winter sports have inherent risks. A recent study explores the trends of injury in alpine skiing and snowboarding over a decade and found that the injury rate among skiers is higher. It has experienced a gradual decline over the years. Among them, the majority of the injuries occur to lower limbs and knees. That’s the reason why it is said that for skiing, you need concrete knees!

In skiing, most fatalities result from high-speed collisions due to the fast speed. However, the majority of snowboarders experience falls and broken legs or ankles. Since the ski equipment has improved considerably over the years, skiers are less likely to be injured this way due. Still, skiing involves more risks of injuries than snowboarding. The best way to avoid these risks is to learn to control the speed.

The technique of falling leaf put snowboarders at an advantage. Once you master it (keeping your balance on the board and moving forward alternately from left to right), it is easy to descend without having to turn or stop, even on a steep slope. Skiers, on the other hand, cannot afford it. They have to take turns, and for that, they have to control their speed and their trajectory.

And conversely, from the first day, skiers can use their poles to push when the slope lacks slope. The greatest difficulty for beginner snowboarders lies in the green slopes: managing to pass a flat without taking off their shoes. In addition to controlling their curves and gaining speed upstream, they must avoid skiers and other snowboarders on the flat and avoid edge errors.

The Level of Fitness You Need for Skiing or Snowboarding

Both skiing and snowboarding are little more than a leisurely workout. If you’ve never done either of these exercises before, you might feel body aches in the initial days of practice!

Snowboarders need more core and back strength as it is required in controlling their speed and direction. Therefore, they are often recommended to do sit-ups, pilates, and other exercises of core and back. In contrast, skiers need a lot of strength in their lower limbs and, therefore, are recommended cycling and weight lifting.

What is Easier, Skiing or Snowboarding?

However, many snowboarders would argue by claiming that if the first two days are a little demanding and tiring, you already start to slide and have fun in snowboarding. The sensations come quickly. If you are athletic, with good physical condition, progress is easier, and you move with confidence on blue or even red slopes in a week.

The falls of the first days in both sports are not inevitable. A good instructor, with appropriate advice, will get you started in the best conditions. It is not advisable to learn on your own because if you have a little trouble at first, you will tend to get discouraged and adopt bad reflexes. Being a good snowboarder who goes everywhere with a good technical level takes proportionally less time than being a good skier who takes years.

However, even when you are already doing one of the sports, starting a new one allows you to enjoy new sensations and enjoy the snow differently, in a more fun way. Down with received ideas, it’s not difficult, and it’s a real plus!