For most of us, skiing is but an act of leisure. Be honest! People don’t usually take ski trips unless they have ample free time and/or are looking for something different to do during the holidays. Perhaps they are sick of huddling before the television, watching 90s re-runs and overdosing on hot cocoa? Not that there is anything wrong with that. But our point is, either way, skiing is generally not on top of the winter break to-do lists. And even if it is, the objective is to have a relaxing and rejuvenating time up in the mountains, away from the hustle-bustle of everyday city life.

It’s true! When the common man thinks of skiing, he imagines a leisurely descent down a smooth mountain slope, basking in the glorious natural beauty and unbridled sunshine, with a chilled but gentle breeze blowing against their skin. This is, indeed, one version; the more usual one. At the other end of the spectrum lies the infinitely more adventurous, and so, less popular, big mountain skiing.

Confused? Don’t be. If you have never heard of big mountain skiing before, you are hardly the only one. In essence, it is but a dangerous version of the beloved winter sport, involving a steeper terrain with plenty of twists and turns. Suffice it to say this form of skiing is not for the faint-hearted.

But that doesn’t mean one can’t read about it. If you are interested in finding out more about it, this guide to big mountain skiing should be able to see you through.

What is Big Mountain Skiing?

Let’s start with the basics. What is big mountain skiing and what makes it stand apart from other different forms of skiing? As we explained earlier, this is a form of skiing that involves unusually steep terrains, backcountry descents and numerous jumps, usually off of cliffs. It goes without saying that this is all done at lightning-fast speeds. How else would big mountain skiers get their adrenaline fix? You could say big mountain skiing is a natural progression of the sport, meant solely for experts seeking a real thrill.

Surely, by now, you understand that this is an extreme sport. Hence, it is frequently referred to as extreme skiing or freeriding as well.

Irrespective of what one chooses to call it though, it is undeniably in a league of its own. For one, big mountain skiing cannot be done without adequate practice and the right kind of equipment. Together, both of these will ensure skier’s safety and allow them to maneuver around the difficult topography better.

One could say the high risk factor alone sets big mountain skiing apart from its relatively less precarious counterparts. Safety ought to be a freerider’s top priority. Ignoring it may lead to serious consequences, including the loss of one’s life. Backcountry and big mountain skiers account for almost all the avalanche-related deaths that occur every year and so, most tour guides recommend preparatory avalanche courses for beginners and experts before they hit the slopes. Herein, you can learn about all practical and theoretical aspects of big mountain skiing safety, such as gauging weather conditions, taking sharp turns while descending and/or what to do should you find yourself stuck in a pocket of snow.

How do big mountain skiers get to the top?

Of course, there is no point in hiking, lest you tire yourself out on the way. Besides, with all that ski gear loaded onto your back, let’s just say it would be next to impossible for you to climb up to the summit. That is why most ski resorts run their own chair-lift lines, carrying skiers up and dropping them off at the top, or closer to the top so they can hike the rest of the way.

Having said that, some freeriders do prefer trekking all the way. Guess it depends on how far the spot one is looking to hit is, as well as how much energy they have and want to expend going uphill. Generally speaking, it is better if you take the lifts and save your energy for the ride back down.

Yes. You may have spotted them in ski catalogs or heard lift-line conversations about big mountain skis. But do you really know much about them, other than the fact that they are slightly larger than regular skis? What makes big mountain skis so special and why should one invest in a pair? Here is the tee.

As big mountain ski circuits typically have bigger risks involved, big mountain skis are wider, longer and designed in a way that allows them to handle high speeds on ungroomed snow and irregular terrain – the kind of conditions big mountain experts crave. There are specific guidelines that the skis fall under, from the dimensions, shape and layup of the core to the materials used to construct them.

For starters, big mountain skis must be high on the ‘damping’ scale. For the uninitiated, this refers to the ability of a ski to absorb and cancel out vibrations. The damper it is, the smoother your ride will be, especially at higher velocities. To achieve this, manufacturers add solid hardwoods like ash, metal laminates like titanal and additional layers of fiberglass to the ski mix, thereby affording it more resistance, strength and durability. Another trick used is the traditional vertical laminate, wherein the skis are pressed between a top sheet and base bound by two vertical sidewalls. This boosts damping and encourages the transfer of power to the edges of the gear.

Mind you, the extra core materials and traditional construction render big mountain skis a lot heavier overall than regular skis. If anything, extremely damp skis begin to feel ‘dead’ at slower speeds as they are meant to produce feedback at eye-watering velocities only.

Historically, extreme skiers resorted to downhill skis for big mountain skiing competitions, seeing as how they were the sturdiest of the lot and fat skis had not been conceived just yet. Nowadays, of course, athletes have a great variety to choose from, most opting for skis with a width of between 110 millimeters to 120 millimeters. Narrower options are highly likely to get knocked around by imperfections on the slope while anything wider will prevent the ski from punching below the surface of the snow.

Also, it is rare for big mountain skiers to be using short skis. As the legend goes, longer skis are more proficient at absorbing high speeds and so, are much more preferred for big mountain skiing races. Not to mention, more edge in contact with snow means greater control in the hands of the skier and ultimately, greater maneuverability.

You may also notice that big mountain skis are fairly simple to look at, sans any modern cuts or extreme shapes. This is primarily due to the fact that excess side cuts make it difficult to keep the ski straight whilst zooming downhill. All in all, the ideal big mountain ski ought to have some camber beneath the feet, a large turning radius and a flat tail to ensure optimum speed, power and control.

If the mere thought of long, heavy and damp skis is putting you off, look at it this way: There is no compulsion to use big mountain skis only. Granted, safety is paramount but there are plenty of other skis out there that are both fast and stable enough, at least for amateurs. In any case, using the term ‘big mountain skis’ is often the manufacturers’ way of promoting their products. Having said that, those of you participating in professional big mountain skiing would be better off investing in the right kind of equipment to maximize your experience.

A great option to start off with would be Traverse Atlas Big Mountain Skis, with a poplar wood core and a width of 116 millimeters which combine to eliminate extra weight and boost shock absorption and stability, even on hard-pack turns. The Austrian steel edges shield against damage and ensure long-term durability and agility. 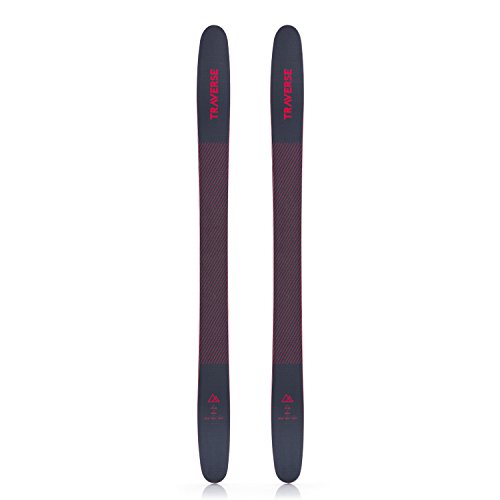 Where can one learn to freeride?

In an attempt to profit from its burgeoning popularity, a growing number of ski schools and resorts are now offering guided big mountain skiing tours around the United States, thereby allowing first-timers to give it a shot.

Most times, the courses require one to a fairly well-versed in ski safety and existing rules and regulations already. One the guide is satisfied with your knowledge of the backcountry, they will proceed with the rest of the instructions.

Just as on-piste courses, off-piste or backcountry courses are also divided into different levels of difficulty. Since local guides know the ski courses by heart, they usually choose courses that match each student’s experience and skills.

The first step to successful big mounting skiing is mastering the powder snow technique. You will also be given ample free time to familiarize yourself with the equipment before actual skiing can take place. You can expect to be given probes, shovels, avalanche transceivers and sometimes, even airbag backpacks, in case of emergencies.

There are many big mountain skiing competitions held each year, with the Red Bull Cold Rush being one of the most sought-after ones. But be warned: the sport can get intense, even for spectators. If you’re still interested in watching from the sidelines, head over to one of the next Scandinavian free skiing championships, such as the upcoming Nordic World Ski Championships, scheduled to be held in Oberstdorf, Germany, from February to March, 2022.

Additionally, big mountain skiing is a popular attraction at the Winter Olympics as well. Here, professional skiers can compete in two major freeriding competitions. However, both of these are conducted on half pipes and do not fall in the same category as skiing on big mountains. Whether big mountain skiing as we know it arrives at the Olympics remains yet to be seen.

Best big mountain ski resorts in the US

With ample snow and a variety of terrains, Alaska is widely regarded as the hub of skiing in America. However, here are the top 10 big mountain skiing spots in the United States:

Best big mountain ski resorts outside the US

For those who are not limited by international travel and want to try their hand at big mountain skiing, Europe has some great options. Located primarily in the central European region, these include:

Skiing is all about testing one’s limits and facing new challenges. Professional skiers who often feel like they have, by now, done it all ought not to hang up their skis just yet. Until you have conquered the big mountains, with their high velocity, steep topography and jaw-dropping descents, your career is incomplete.

Just make sure to sort out all the prerequisites before you zoom off. Study the course and the equipment beforehand, lest you run into a problem up there. And most importantly, practice!