It’s but Sod’s law. You will finally set off on that skip trip that’s been in the pipeline for months and take ill on the second day. If not that, you will either miss your flight, forget an integral part of your ski gear at home or arrive at the resort only to be told that the room you doled out all that extra cash for is no longer available. And if the weather Gods really want to upgrade your trip, they will send down a fresh bout of snowfall so that all surrounding trails are rendered un-skiable for the next few days.

Really, a successful ski trip is no easy feat. There are a multitude of loose ends to wrap up; a multitude of to-dos to check off of your pre-departure list. And that is before you even get time to worry about the massive dent that will come in your finances the second you swipe that card at the check-in counter.

Lucky for you, how much you end up paying overall is in your hands. Confused? Hear us out! Any regular ski trip can come up to anywhere between $200 to $500 per person, depending on the level of luxury you are looking for and how you choose to get there. This amount is exclusive of airfare but includes lift tickets, gear rentals, accommodation, and food. Add on some private ski lessons in America and the grand total could leave you in shock.

But like we said, there are ways to curb your expenditure. One such tactic offered by many ski resorts across the United States is the afore-mentioned lift tickets. Interested? Good. We have compiled this guide on lift tickets for ski resorts and how they can help reduce the average ski trip costs. Read on to find out more and plan your next ski trip accordingly.

What are Lift Tickets?

For the uninitiated, a lift ticket – also known as lift pass – is basically an ‘identifier’ attached to a skier or a snowboarder’s outerwear to indicate to resort staff, that the wearer has pre-paid for a ski lift. In other words, they may be allowed to take the lifts that transport people and equipment up and down the mountains for free.

Almost all major ski resorts across the United States offer lift ticket packages to generate greater footfall and encourage more people to book their ski trips with them. The ski resorts in Vail and Aspen, both in Colorado, charge up to $200 per day for some single-day lift tickets, as do Beaver Creek and Breckenridge, also in the same state.

Now, we agree with you. Spending north of $200 per day, per person, can hardly be classified as cheap. But keen bargainers can use points or deals to cut down on the costs. It is also advisable to purchase your lift tickets well in advance. Ideally, do it before the skiing season starts. This can not only save you amble money (or points) but also ensure availability, lest you arrive at your ski resort after all lift tickets have been sold out. Advance purchasing may be possible via advance single-day ticket reservations or large holiday packages or passes.

What are the different types of lift tickets?

There are many different types of life tickets for skiing. These include:

As is the case with everything else, technology has forever changed skiing as well. Before that, though, ski tour operators would become either staple or glue on the lift tickets directly to skiers’ clothing to prevent them from being transferred from one skier to another. This would deprive ski resorts of potential revenue as well.

If goes without saying that attachable lift tickets would destroy skiers’ clothing, though. Not to mention, the tickets tended to fly off in the very likely event of strong wind and/or while skiers were zooming downhill.

Many US ski resorts – or any other venues that issue entry tickets – use a wicket to secure the tickets. This is a short piece of wire that loops through the skiers’ clothing, backpack or ski gear carrier.

The ticket wicket was first invented by an employee named Martin S Charlie Hanley from the Killington Ski Resort in Vermont back in 1963. Hanley’ wife Jane was the one to coin the term ‘ticket wicket,’ which he patented in Canada and the United States in 1966. He then sold the rights to The Sherbourne Corporation, which Hanley had created the wicket for.

From here on, Sherbourne licensed the ticket wicket to ski resorts across the United States while the Hanleys promoted it. The device was picked up far and wide, even though Hanley never made any money off of it. As a skiing enthusiast himself, he was satisfied with just having invented something that had helped take the then nascent sport a little further.

Over the years, the ticket wicket has inspired many researchers to improve upon its original design, thereby making it more convenient. Its popularity has even led to mainstream manufacturers of ski gear to include a wicket loop in their jackets, both in cloth and plastic to allow the wicket to latch on without getting caught in the zipper. There are other interesting ski accessories made, especially with ticket wickets in mind as well. Take, for example, the Liftie Sky Pass Holder – a one-sized season pass holder that skiers can attach onto their helmets or google straps. It clearly displays the ticket and securely clicks it in place so that it couldn’t fall off or fly off while you are skiing. The ticket can be removed when the Liftie is installed. 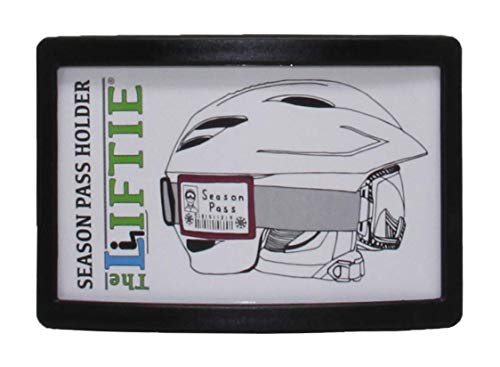 An effective alternative to ticket wickets is the increasingly popular zip-ties, used by ski resorts that wish to avoid using metal wires to secure tickets. Zip-ties are in plastic and make it easier to remove the tickets. Unfortunately, these wires can be rather difficult to remove from clothing as well. And for some reason, manufacturers either turn a blind eye to the issue or just fail to resolve it.

Another major disadvantage of zip-ties is that they require the tickets to be checked individually. Of course, this has been a manual process for decades, usually performed by the employees of the ski resorts. However, with more and more people flocking to the ski slopes to practice or vacation, additional staff had to be hired for this express purpose. Moreover, it was easier for skiers to rig the system.

In order to rectify all these aforementioned problems, some US ski resorts have gone completely digital and started issuing digital cards embedded with RFID chips. Instead of being attached to skiers’ clothing, these cards are placed in their pockets throughout their stay at the given resort. The best part is that they need not be removed and put back again and again for the skiers to be let in.

An Italian company by the name of ALFI or Borgo Ticino (NO) is widely credited as having devised the world’s very first digital ski pass back in the year 1974, thereby introducing the first electronic access control system ever for ski lifts in San Vigilio di Marebbe. This was further extended to the Dolomiti Superski and then to the French resort of Plan Joux in the year 1999. And so, in this way, electronic lift tickets are disseminated across the world of skiing and snowboarding.

Before you book your next ski trip, we suggest jotting down what exactly you expect from it. Besides looking at hotels and airplane tickets, determine whether season passes will suit you better or merely a few lift tickets.

So, what are the factors one need to consider to arrive upon that conclusion? First and foremost, decide on the number of days you wish to spend on the slopes. If you are headed there for a mere couple of days, purchasing a skiing season pass would obviously be a waste of money. But if you are going for a week or longer, you could end up spending nearly $1,000 to $1,200 on lift tickets alone!

Along with this, determine how far your lodging is from the trails or how many resorts you can ski with using the same season pass.

There are four main ski pass programs available in the United States: Epis Pass, Ikon Pass, Mountain Collective, and Indy Pass. Considering the fact that each pass comes with its own set of advantages and disadvantages, which of these is ideal for you and those you are traveling with will be contingent upon where you want to ski when you are planning to go there and ultimately, how many days you plan to spend on the mountain.

Bear in mind that prices almost always escalate when ski season (aka winter) approaches and ski passes go off-sale for that entire time period, usually between December to January. Purchasing a pass in the off-season can save you a whole lot of cash later on. In fact, even if you plan to ski for only a day or two and do not invest in a ski season pass, locking in the dates well in advance will surely bring your daily skiing rate down by at least half, even at relatively more expensive resorts in Vail, Breckenridge and Beaver Creek.

Like we said at the start of this post, there are many things one has to account for before the can hit the ‘Confirm Booking’ button on a ski trip. And out of all of them, their financial standing is of utmost importance. Ski trips are a major investment, especially if you are heading up to the mountains with your family. Airfare, lodging, and the exorbitant daily ski gear rental charges are just some of the things you will have to pay for while there.

Lift tickets cannot make skiing a cheaper activity per se, but they can help bring out the costs of your ski trip by a tad bit, at the very least. If you wish to save more and give yourself and your loved ones a wholesome experience together, we recommend buying your lift tickets during off-seasons or well ahead of your impending trip so they are not as expensive as they usually get come November. That is the sole reason lift tickets for skiing exist: To help you enjoy more while paying less.